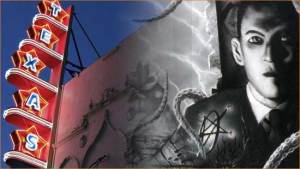 DOA Blood Bath Entertainment will host the 1st Unnamable Blood Bath Film Festival on H.P. Lovecraft's birthday, August 20th, 2011 at the historic Texas Theatre in Dallas, Texas and showcase independent short and feature films based upon H.P. Lovecraft's literary works or obviously inspired by H.P. Lovecraft's works.
Filmmakers can submit their short and feature films for consideration to:
DOA Bloodbath Entertainment
C/O UBB-FF
PO Box 643
Farmersville, TX  75442
The entry deadline is June 30th, 2011 and there is no cost to submit a film.  Official selections will be announced on August 1st, 2011.
Contact Andrew Rose (info@doabloodbath.com) to discuss sponsorship opportunities.
Info@doabloodbath.com
Click here for more...
(Thanks to Andrew Rose)
Posted by Craig Mullins at 7:38 PM