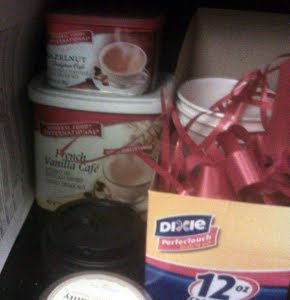 This came up on my Facebook page when I posted that my brain exchanged the word "French" for "Eldritch" when I saw a tin of General Foods International French Vanilla Cafe sitting behind my manager's desk at work. I posted that I must have Lovecraft on the brain, which makes sense because for me, this is the time of year that I start thinking about all things H. P. Lovecraft.

I've programmed myself. When Brenda and I first started considering moving to the Portland area, I went online and did a bit of research. I found the area comic book shops, the public transportation system . . . and I confirmed that The H. P. Lovecraft Film Festival was happening. I knew about the festival before the move. I knew there was a loose community of amateur moviemakers who adapted Lovecraft's work when I found a Miskatonic University website (I can't find that site anymore) selling merchandise, which included the VHS releases of Lurker in the Lobby: The Best of the H.P. Lovecraft Film Festival, Vol. I and Return to Innsmouth.

I bought and watched and rewatched those VHS tapes repeatedly. Even though I was already reading Lovecraft, those tapes blew the doors open for me. There were people . . . people like ME (at the time, I was making no-budget movies of my own) . . . who not only loved Lovecraft but put his work on screen.

I had to get to the Lovecraft Film Festival. Unfortunately, our first year in Portland I wasn't able to attend (I don't remember why, but I regret it), but the next year (2002) I was there. We didn't have a car at the time, so I was taking that public transportation to the festival, and I didn't get to stay the entire time or watch The Darkest of the Hillside Thickets perform, but I still had a lot of fun. I saw some wonderful films, some outstanding shorts, and started meeting other like-minded Lovecraft fans. I met the director of Return to Innsmouth (Aaron Vanek), and a number of other filmmakers that over the years that I've come to call friends.

At least year's festival, Festival Director Andrew Migliore announced that he'd be stepping down. There was rumbling that the festival would still continue in Portland (a satellite festival popped up in California thanks to Mr. Vanek), but for a good part of this year, there was little to no talk about a 2012 H. P. Lovecraft Film Festival happening in Portland. When an announcement was made . . . I know it sounds silly, but I felt a rush of relief. For years, I've joked that "October doesn't begin for me until the HPL Film Festival," but there's a lot of truth to that. It's become a tradition for me. I get to see old friends and watch some fantastic movies in a comfortable setting (The Hollywood Theatre), although I think some of the comfort comes from the familiarity of the building and the event rather than the actual accommodations (although it has gotten better over the years!).

It is a smaller event this year (it's only two nights, and there won't be as many films shown) as the current keepers of the local Festival flame wanted to keep the festival more intimate while still giving us Lurkers a fix of Lovecraft.

I'm counting down the days.

(I wish I could get Return to Innsmouth and Lurker in the Lobby: The Best of the H.P. Lovecraft Film Festival, Vol. I on DVD. I MIGHT have the VHS tapes stashed away in a box somewhere, but I'd love to put them in my DVD folders along with my 5-disc set of The H. P. Lovecraft Collection.)