Joseph Nanni and Bad Advice for Good Times are two for two in the world of Lovecraft cinema, with both Casting Call of Cthulhu and Elder Sign garnering wide spread popularity through festival appearances and the web, and he has given Unfilmable.com an exclusive look at his next two projects! The films, titled Black Goat and Drawing Baphomet, will be shot simultaneously and are the first two parts of a trilogy to be completed later...
According to Joseph, new ideas were brought to light during correspondences with production designer John Coulthart (who is designing shub-niggurath, among other things), and Drawing Baphomet underwent a massive re-write to include references to the great god pan from the works of Arthur Machen, without changing the core idea of the original script (although the "weird" elements have been cranked up), which revolves around a young man who is unwittingly indoctrinated in a secret society as he goes from one "expert" to another while trying to obtain a translation of an ancient family heirloom...

A teaser trailer, which is currently being finalized, should appear in the next couple of weeks, and will feature the main prop from the film; a medieval era translation of a mythical Arab text (see below). In the film, the book has been retrofit in a locking metal sleeve that was added sometime after the Second World War...
"I am proposing to shoot in the Grey Bruce area of Southern Ontario and most of the locations have been identified." Joseph tells Unfilmable.com, "This is a incredibly diverse part of Canada where you can find sand dunes, cave systems, light houses, grave yards, an island castle, decrepit port towns, turn of the century mansions, second world war era bunkers, archeological digs, historic native Canadian settlements, shipwrecks...the list goes on..."

Watch this space for updates, and keep your eyes open for the teaser which will debut in a few weeks... 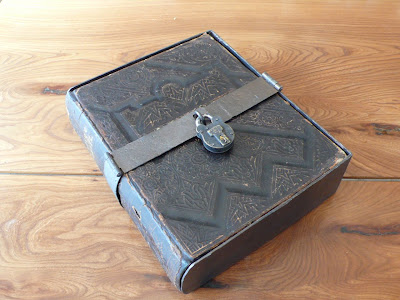 (Thanks to Joseph Nanni)
Posted by Craig Mullins at 9:05 PM