IDW will publish a new collection titled Classics Mutilated, the first of which is Dread Island, written by the great Joe R. Lansdale! According to the official press release, "Classics Mutilated offers a different take on the current monster-lit trend by challenging a coterie of major talents to twist fantasy and horror elements with classic tales and icons, creating all-new stories. Lansdale's "Dread Island" showcases the collection's unique tone by featuring Huck Finn and Tom Sawyer in a new adventure, with bizarre fantasy and supernatural elements out of both H. P. Lovecraft and Uncle Remus."

"I wrote 'Dread Island' based on my love for Mark Twain," reveals Lansdale, "which collided with my interest in Lovecraft, and the fact that the Uncle Remus tales may have been the first stories I ever read. And then there were comics. I always saw 'Dread Island' as a kind of comic book in prose, the old Classics Illustrated look. That's how it played out in my head."

Look for Dread Island this October... 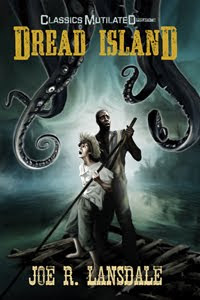 (Thanks to Dread Central)
Posted by Craig Mullins at 5:44 PM