Creature from the Black Lagoon the musical...


Dread Central reports some old but interesting news regarding Universal Studios Hollywood's Creature from the Black Lagoon stage musical...
From the Universal press release:
"Drawn from Universal's crypt of classic monsters and updated with spectacular Broadway production values and special effects, "Creature from the Black Lagoon—The Musical," will rise, live, on stage at Universal Studios Hollywood beginning spring, 2009.
With state-of-the-art stagecraft, acrobatic choreography and hilarious, toe-tapping music, the Creature will be brought to life in a story based on the original screenplay, updated to emphasize the element of romance and just a bit of comic relief. Original new music and dazzling production numbers will keep the attraction contemporary and lively.
Audiences will be immersed in the ominous environment of the deepest Amazon, enveloped by the exotic sounds and scents of the jungle. And from the production's first moments, they'll be thrust into an unexpectedly outrageous, strangely romantic, frequently melodic and often hilarious adventure as a monster classic is re-imagined for the 21st Century.

"Creature from the Black Lagoon—The Musical," will be staged as an attraction within the Universal Studios Hollywood theme park. Admission will be included in the price of theme park tickets and annual passes." 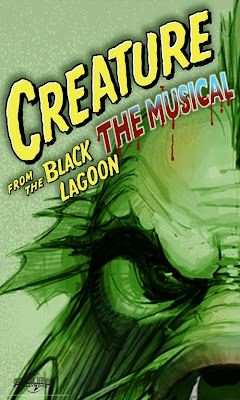 (Thanks to Dread Central)
Posted by Craig Mullins at 8:26 AM