Tom Sullivan reviews The Other Gods...

For the record this is my first film review for Craig Mullin's excellent site Unfilmable.com dedicated to the spread of creeping chaos that is the cultural effect of the arcane author H. P. Lovecraft's writings. It's icy tentacles have even gripped me. Craig has sent me a hefty box of Lovecraft inspired movies in exchange for my promise to review them. As more Lovecraft films are being produced constantly as Unfilmable.com documents with updates my task may never end. And I am already insane... 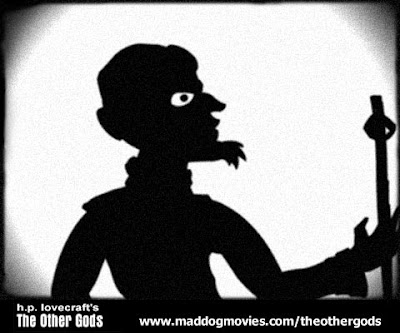 Which leads me to my first film review. It must have been the fates that my hand should pick this film out of the large box of options. For this film contains all the ingredients for what I have determined to be essential Lovecraft elements. Please argue with me on these points I am here to learn.

This film is actually a document. The director, Peter Rhodes was an acquaintance of H. P. Lovecraft and a time line and biography of this obscure but powerful artist can be read at the Mad Dog Movies website. My research online wasn't able to find anything other than the producer's site but that's not unexpected due to the lack of exposure and short life this artist endured. One of my favorite Lovecraft elements is the information derived from the unusual source. A stack of Peter Rhodes films were discovered and Producer Michael Boas has spared no effort in the restoration.

The Other Gods tells the story of the proud and arrogant Barzai the Wise and his ascent of Hatheg-Kla to see the faces of the Gods. His cautious disciple Atal follows but only Barzai can muster the obsession to reach the pinnacle. The Gods leave a chiseled message in Mount Hatheg-Kla for all who may follow the poor foolish Barzai.

Peter Rhodes tells his story with back lit flat paper puppets moved via stop motion animation. This technique and artistic design of the production enhances the ancient setting of the story. 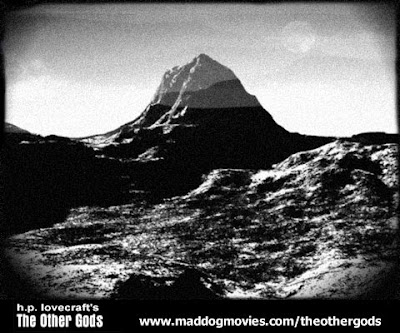 The story is an accurate and unsettling warning about tempting the Gods and although short like the original story it is just as effective. When Barzai gazes upon the face of Nyarlathotep, Rhodes gives us a psychedelic experience generations ahead of his time. Or perhaps the artist made excursions into the hallucinogens available at the time and took notes. I'll leave for scholars of the Pnakotic Manuscripts to seek any ritual significance of the complex designs in this sequence that could be keys to open dimensions best kept shut.

There are notes about the director and French Subtitles.

I must warn you dear reader to not follow my dialogue any longer. Only madness and despair go further because there is more to this film, than man should know... Yet a cold, overwhelming compulsion beyond madness drives me to tell all that I know.

I can only issue the same calls found in Lovecraft's original story of The Other Gods... 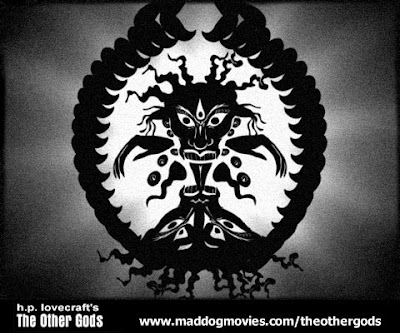 In the great tradition of Lovecraft's props and people such as the Necronomicon and the Mad Arab readers have assumed the reality of these literary creations. Producer Michael Boas has managed to fool me into believing Peter Rhodes actually existed. When you find the "hidden menu" on the disc, Director Michael Boas spills the beans on his perfectly presented cinema event. Michael Boas is the creator/animator of this film. Peter Rhodes is a fiction who seems to have taken on a life of his own.

There is a rewarding amount of bonus material for such a short film including a short documentary, early versions of the film, a twenty-two minute interview, storyboards as well as the original story.

A visit to Mike's site www.maddogmovies.com/theothergods will carry on the fun with Peter Rhodes but I couldn't see any mention of Michael Boas himself. This talented animator and film maker deserves a big applause for a film well done in the best Lovecraftian vein.

Come on Mike take a bow!

Please note: A different set of images accompanied this review when it originally appeared...