Are you watching Fringe? 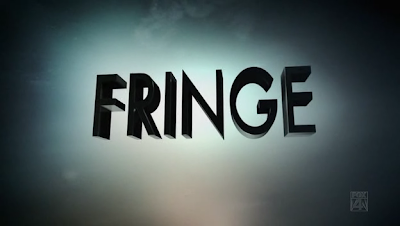 I like to think Lovecraft would appreciate TV's Fringe, which blends sci-fi and horror with great effect. And aside from the monster-of-the week episodes, it has an ongoing story concerning the dangers of cross-dimensional travel.
Well, the Lovecraft references are getting pretty thick lately. December 3rd's episode, "Snakehead," had imagery like this: 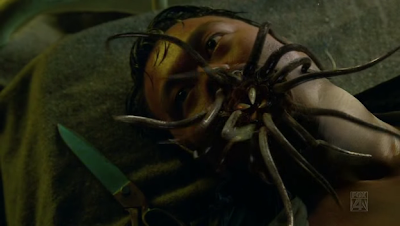 Cute, right? Sure, I hear what you're saying. One squid creature does not a Lovecraft show make.
But then came the December 10th episode, "Grey Matters." The story opens with a character in a mental institution named Joseph Slater.
"Jos Slater?" I thought. That sounded familiar. Wasn't that the mental patient's name in Lovecraft's "Beyond the Wall of Sleep"?
As the Fringe episode continues, we discover that Slater's mind contains a clue to crossing into another dimension. Not in the same way that Lovecraft's Slater journeyed to the Dreamlands, but the character's name can't be a coincidence.
No, the writers are definitely teasing us. Two more mental patients are related to the case. Patients with the following names: 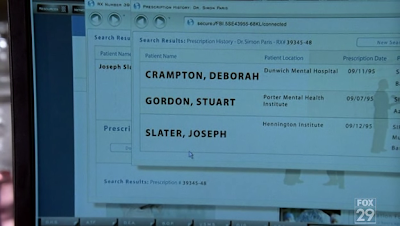 I yelped so loud the neighbors heard me! Director Stuart Gordon and his frequent star (Barbara) Crampton get props -- it's like they're writing the show just for me. (And it wasn't till I paused it later that I discovered the name of Crampton's hospital was DUNWICH Mental Hospital.)
So what more can I say? Aside from the HPL references, it's a darn good show with great concepts and strong characters. Check it out on HULU if you like.
Fringe Season 2 : Ep. 10 : Grey Matters

Watch it large here.
EDITED TO ADD:
Someone just pointed out to me that there's even a "Doctor West" in this episode. Don't know how I missed that one.
Posted by Mike Boas at 12:03 AM