Relic of Cthulhu gets Slammed 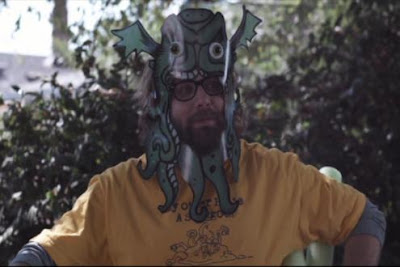 When last we checked in on Relic of Cthulhu, the feature film from director Henry Saine had won best comedy at the 2009 H.P. Lovecraft Film Festival.

The latest news is that The Last Lovecraft: The Relic of Cthulhu (new title?) will be one of ten narrative features screening at the 2010 Slamdance.

This mysterious film (mysterious because I can't seem to find a website or trailer for it online) is described as follows:

"Jeff is an ordinary guy that is stuck at a dead end job with a boring life, when a strange old man gives him an Ancient relic and tells him that he is the last bloodline of H.P. Lovecraft. He and his friend Charlie embark on an adventure to protect the relic piece from falling into the hands of the Starspawn and his minions that wish to reunite the relic and release Cthulhu back into the world."

Thanks to Dread Central.
Posted by Mike Boas at 5:26 PM