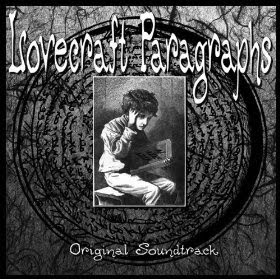 If you're like me and missed the H.P. Lovecraft Film Festival this year (*sniff*) you may be interested to read first-time filmmaker Reber Clark's impressions of the event. The Lovecraft News Network has posted his thoughts on the festival, where he premiered his short film, "Lovecraft Paragraphs."

The film earned warm praise from the likes of S.T. Joshi and others, but it apparently provoked the opposite reaction in some. Festival director Andrew Migliore called it "...the most controversial film at the festival this year."

If you'd like to experience the film in audio form, Clark has released the soundtrack as an MP3 album through Amazon. $8.99 gets you two versions of the music -- with and without the narration.

The album is for sale here.

LCN's interview with Clark is here.

For more about "Lovecraft Paragraphs" visit http://lovecraftparagraphs.blogspot.com
Posted by Mike Boas at 2:43 AM