Pickman's Models: Night of the Demons...

I know it's not Lovecraft, but I just had to post this pic of the water demon from Adam Gierasch's upcoming remake of Night of the Demons! Look for it on DVD October 19th...

About the film: Angela Feld is throwing the Halloween party to end all Halloween parties at the infamous Broussard Mansion in New Orleans, where dark events transpired almost a century ago. But when the packed party gets busted by the police, Angela and her friends Maddie, Lily, Suzanne, Colin, Dex and Jason are the only ones left behind. Soon Colin and Angela make a grisly discovery in the basement and inexplicable events start to take place. With the mansion gates mysteriously locked, the seven find themselves trapped for the night...and soon they're fighting ancient demons for their very souls... 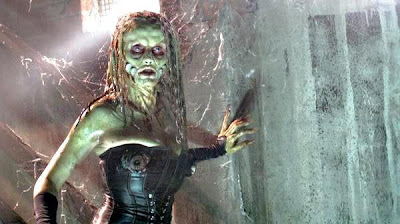 (Thanks to myspace.com/notdfansite)
Posted by Craig Mullins at 3:35 PM