In keeping with our recent deluge of At the Mountains of Madness news, author Tim Curran has written a sequel to his novel Hive, which itself was a sequel to Lovecraft's AtMoM, called The Spawning! The book, which clocks in at close to 400 pages, will be released this summer by Elder Signs Press...

About the book: Bringing unimaginable ancient horrors to light, this supernatural novel weaves several terrifying discoveries into one disquieting tale. At an isolated research station in Antarctica, a cosmologist experiences a singular, horrifying encounter. In the grip of an unforgiving snowstorm, the members stationed at Mount Hobb confront a terror that will change the world. Amidst threats of national security, conspiracies, and cover-ups, a new group of scientists at Polar Clime Base attempt to unravel an eldritch mystery that has remained locked away for billions of years. Hidden away in the shadows of glacial caves, a malevolent intelligence that not only threatens the lives of those who discover it but also the future of the human race, lies waiting. Despite the dire warnings from the researchers at Polar Clime, the National Science Foundation refuses to intervene, leaving the inhabitants alone in preventing a final war for the very existence of humanity. In this riveting science fiction thriller, the unforgiving landscape of the Antarctic is explored, revealing the darkest place on Earth and the unknown menace that dwells beneath its ice... 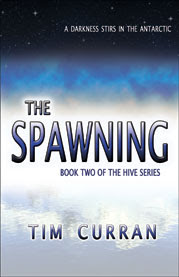 (Thanks to eldersignspress.com)
Posted by Craig Mullins at 7:14 PM