New film from the director of The Island...

The following press release is for the film 109, the latest from writer/director Nathan Fisher, whose previous films Beyond the Wall of Sleep and The Island received a lot of coverage in these pages. 109 isn't necessarily Lovecraftian, but if its anything like his previous efforts, it will be well worth seeking out...

For Immediate Release:
Announcing the world premiere of writer/director Nathan Fisher's third locally produced short film, 109.
109 tracks the bizarre steps taken by a deeply disturbed loner totally controlled by his obsessions. He may have found a salve for his tortured mind, but at what cost? It features a talented cast of experienced performers as well as the film debut of Murfreesboro resident Rob MacLaney, 109 delves into the unexpected horror of the everyday.
Shot on location in Murfreesboro, Lebanon, and McMinnville, Tennessee, 109 is Gonzo Entertainment's most ambitious effort to bridge high production value with low budget film-making. The cast and seasoned crew have succeeded in telling a simple story that still contains tremendous depth and will definitely leave audiences talking. 109 also features an original soundtrack by Murfreesboro musicians including John McGhee, Jonathon Nash, Lars Hall, and Kenny Johnson.
This premiere will be on Friday September 16th at The Boro Bar and Grill located at 1211 Greenland Drive Murfreesboro, TN. The screening begins at 9:00 PM and will also feature a screening of Gonzo Entertainment's award winning 2010 release, The Island, along with other selected locally produced short films. Admission is $5 and The Boro is 21 and up.
The Island is currently completing its successful festival run with a screening at the 2011 H.P Lovecraft Film Festival in Portland Oregon. It has previously screened at The World Science Fiction Convention, The Phoenix Film Festival, The Dam Short Film Festival, The Las Vegas Media Xpo, The River's Edge Film Festival as well as numerous others.
Nathan Fisher has been a fixture in the Murfreesboro arts and music scene for over 20 years. Perhaps best known as the frontman for seminal Murfreesboro punk rock band Doctor Gonzo, he is also the voice of the Nashville Rollergirls. 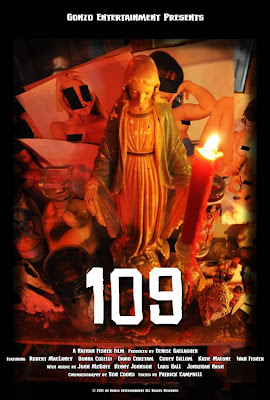 (Thanks to Nathan Fisher)
Posted by Craig Mullins at 4:17 PM