(From Plan D: The Official Website of Derek M. Koch) 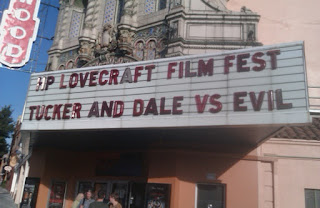 The 2011 Portland H. P. Lovecraft Film Festival has come and gone. As I mentioned in a previous post, it was a smaller event; it only ran two nights and it only ran on one screen at the Hollywood Theatre. Because of this, there were only two feature films shown, and they were SOLID and more than carried the load for a festival typically carrying multiple films. But more on those in a bit.

While some congregated at Magnolia's Corner across the street, the line started forming in front of the Hollywood Theatre as early as 5:00pm on Friday. It quickly became obvious that this was going to be a crowded event. When the doors opened at 6:00pm, the lobby of the Hollywood was flooded with Lurkers eager to visit the vendors' tables, hit the concessions bar, and make their way to a seat in front of the main screen.

A fez-topped Andrew Migliore took the stage to welcome us, and then quickly turned the show over the new keepers of the eldritch flame that is the H. P. Lovecraft Film Festival - Brian and Gwen Callahan. After a quick welcome, introduction and Mi-Go-Brain-Canister-in-the-Ladies-Bathroom joke, the movies rolled.

Rick Tillman's Call of Nature started the Shorts Block. It was short, sweet, to the point, and got some laughs with its animated Cthulhu. Other shorts I saw that night included:

Flush With Fear (dir. Christopher G. Moore) - This was a fun short following a woman escaping her breaking down relationship with a good cry in the bathroom. In the bathroom, she unfortunately makes the mistake of reading some of the graffiti-that-should-not-be-read on the stall walls. Fortunately for us, Moore and company gave us some great visuals and scare moments as a result of that damned graffiti.

Doppleganger and Idle Worship (dir. Theo Stefanski) - These two shorts were nothing but beautiful. These were stop-motion animation pieces featuring a skeleton in some sort of desert wasteland setting either looking for others like him/her/itself (Doppleganger) or searching for something to worship (Idle Worship).

Edgar Allen Poe's "The Raven" (dir. Christopher Saphire) - I should be completely honest. I can watch hours upon hours of Lovecraft-based or -inspired movies, but I really don't enjoy the Poe-movies as much. I get the reason why Poe always has representation at the HPLFF as Poe's influence on Lovecraft is evident, but . . . I, personally, am kind of over it. It's a personal thing. That said, this short, featuring Saphire as a troubled writer, remembering his lost Lenore while a raven taunts and haunts him, was striking. The imagery slowly cycles into a fast-paced nightmare with some stunning cinematography.

Dirty Silverware (dir. Steve Daniels) - I've got a few pieces of mismatched silverware - an odd faux-wood-handled soup spoon, a fork with a plastic stem, etc. - and Dirty Silverware tells us where these pieces of unfortunate utensils come from. Not only are they "dirty," they're also capable of great evil, and this short tells the story of one man who loses more than most would dare to sacrifice to stop this table setting madness.

I had to step out of the theater for the final shorts of the night, but I've heard that Ethereal Chrysalis was amazing.

After the Block and a few minutes to stretch our legs, it was time to settle in for the movie I was most looking forward to seeing at this year's festival - The Whisperer in Darkness (dir. Sean Branney).

I've been a fan of the H. P. Lovecraft Historical Society for years. I've snatched up their Dark Adventure Radio CDs, their Prop Collection .pdf CD-ROMs, and have always looked forward to their vendor table at the Festival. Seeing their The Call of Cthulhu on the Hollywood Theatre a few years ago was a fantastic experience, and I know we've all been counting down the days until we could see The Whisperer... at the HPLFF.

It didn't disappoint. Branney's skill as a director are on full display; Troy Sterling Nies' score is his best work yet; Matt Foyer's physical performance reminded me of the best of Dwight Frye while his unique vocal delivery pulled me into the film's story effortlessly. This was an ambitious production, and everyone delivered.

The HPLHS' mission is to create time-period-appropriate-but-modern-audience-acceptable props and materials based on the work of Lovecraft. The Whisperer... is an ideal example of what they do. The movie is presented as a film that could have been produced and released in 1931, the same year the original story "The Whisperer in Darkness" was published, but I'd argue that it would probably be more at home in the mid-30s as films like Frankenstein and especially Dracula were a bit "stage-y." Nies' score is a bit more "full" than the scores from this time period's films, but none of this distracts or detracts from The Whisperer.... In fact, this is one of the strengths of the HPLHS, Sean Branney and co-writer Andrew Leman - they know when to bring just a touch of modern sensibility into their work to make the work accessible to modern audiences. (That's not to cast a negative light on the film at all!)

I really enjoyed The Whisperer in Darkness, and can't wait for it to hit DVD and Blu-ray (and for the score to hit CD!). Yeah, there are a few long stretches and, yeah, there are some changes and expansions made to the original story, but as a film . . . I see it easily becoming one of my favorite Lovecraft adaptations.

The night ended with a Q&A with director Branney and special make-up effects artist Dave Snyder before drinks at the after party at Tony Starlight's Supper Club (where an odd choice to play a "Midnight Special: The Legendary Performances" DVD was made!).

I'll follow-up with a Part Two/Day Two wrap-up later this week.
Posted by Derek M. Koch at 1:19 AM