The Innswich Horror by Edward Lee, review by Steve Hergina 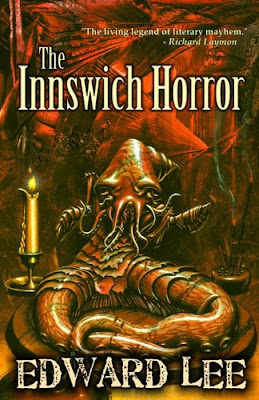 I was very skeptical entering into this novella due to the past H.P. Lovecraft stories Edward Lee's written, but I was pleasantly surprised how smoothly the story flowed. It almost seems like he went more traditional Lovecraft than his usual "hardcore" sex and violence. It definitely has its elements of horror but a serious lack of sex usually apparent in his novels.

Foster Morley decided to take a trip and follow the path of the greatest author of his time Howard Phillips Lovecraft. On his motor coach trip to Salem, they stop in Olmstead, like in The Shadow over Innsmouth. He figures maybe Lovecraft stopped there to write the story itself. He finds the town’s real history by talking with the locals, only to find it is more and more like the novel. Lovecraft, it seems, came up with the whole story from Olmstead, just changing the names and places slightly. Then it is revealed Lovecraft had been there and had taken a picture with one of the locals, a must for this die hard fan. He ventures around rather than traveling to Salem. He opted to scope out the town and tries to visit with the people and places Lovecraft might have been there to experience what Lovecraft had only a few years ago.
He was in town looking for his friend, who had been out looking to locate work during the hard times of the era. His friend was an accountant, by trade, so Morley figured he had found work. The town was rich in an abundance of fishing. Exporting to all the other local towns were nothing for them, even though most were fishing towns, it seems Olmstead had the best fish and the most.
Upon his travels he met Mary, who he fell hard for. As they talked more about Lovecraft and the town, he found out she had eight kids, with a ninth on the way. He heard about her husband running away, and soon realized most every woman in town was pregnant. After much more digging, the more he found out about the town, the more he concluded that Mary needed a stable life, with him of course, so he decides to take her away. Being rich didn't hurt matters either, he could support her and the nine kids better than how they were surviving now. He knew too much about the town and it's past now, the townspeople believed; he had become a liability and couldn't leave now.
This has to be the best Lovecraft story Edward Lee has written yet. His usual "hardcore" style has been tamed but, as I believe, has enough potency to make this a 21st century Lovecraft story.
Posted by steve at 9:01 PM