Ravings: Two Trios of Terror Dates: October 13, 14, 15, 21, 22, 27, 28, 29 at 8pm
A night of six horror stories by two of the best writers of the genre, H.P. Lovecraft and Edgar Allen Poe.
This presentation will mix readings, acted scenes, projected media, special effects and dance bringing together the talents of Art Director- David Butler; composer/sound designer-David Kane (both originators of the event) with director- Tim Newell and choreographer- Amy Taravella.
Ravings: Two Trios of Terror includes the following stories:
From the Beyond - The tale of a man returning to his desperate friend's attic laboratory where his mad machine rips open the veil between our world of reality and the world of terrible, dangerous and carnivorous things.
The Beast in the Cave - While touring an underground cavern a visitor wanders off and finds herself lost in total darkness, she soon senses the approach of something menacing and inhuman.
What the Moon Brings – This lush poetic narrative weaves a vivid vision of moonlit gardens, and the weird sea, below whose surface reveals an enticing ghastly city of the undead.
The Picture in the House - A genealogist exploring the back woods and farm lands of New England, finds himself taking shelter in a seemingly abandoned house full of strange literature and secrets beyond any horror he could imagine.
The Music of Erich Zann – A restless student of Metaphysics makes the acquaintance of a gaunt and queer viol player, and finds, to his horror, the purpose of the player's late night weird and increasingly intense music and its connection to the chill breeze and rattling shutters of the window.
The Cask of Amontillado – this classic tale of Poe, takes us through the slow and methodical revenge on Fortunato whose arrogance and love of wine leads him to his unforgettable and horrible demise.
Cast: Anthony Alcocer, Kay Kerimian, Nicholas Lama, Scott Malkovsky, Aaron Piepszny and Linda Stein.
Design team: Zach Serafin as Set Designer, Derek Heckler as Lighting Designer, Leigha Weeks as Costume Designer, and Seth Tyler Black as Media Designer. Puppet design & construction by David Butler.
Tickets:$16 for general admission and $12 for students, seniors and military. 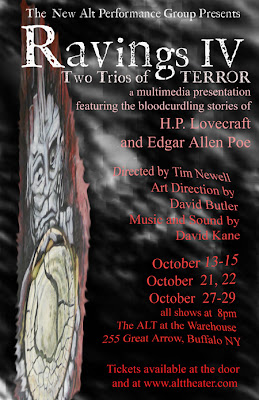 (Thanks to alttheatre.com)
Posted by Craig Mullins at 11:32 AM