Hello everyone, long time no see.

Comic fans will be interested to note that Boom! Studios is re releasing their sold out Cthulhu Tales in an omnibus edition for those of you who missed it before, as well as offering The Calling: Cthulhu Chronicles. For Mignola fans there's also a redesigned Jenny Finn: Doom Messiah.

IDW Publishing also has Locke and Key: Welcome to Lovecraft available as a special edition collection (along with tons of Godzilla related stuff for those of you whose tastes also cross over into Kaiju territory).


With luck I'll have some nice book or movie updates soon.
Posted by Keith Lindsay at 4:17 PM No comments:

Andrew Morgan's promising Lovecraft anthology Arkham Sanitarium, featuring adaptations of The Haunter of the Dark, The Shunned House and The Thing on the Doorstep, has completed principal photography, but needs your help to open its doors! An IndieGoGo campaign has begun to help fund post-production, including money for audio/visual work (foley, sound-mixing and digital visual effects) and the score (from our favorite composer, Mars Homeworld!). An additional 3-4 days of filming are also planned...

Check out Andrew Morgan's interview with Twitch here, or help support his efforts here...
(Thanks to Andrew Morgan)
Posted by Craig Mullins at 12:50 PM No comments:

More than 2 years in the making, Lost Land was confronted with obstacle after seemingly endless obstacle. Technical failures, logistic nightmares, footage loss across continents and even the death of the films musical composer mark the history of this short films production, shot in the summer of 2009. Now, after nearly two years of salvage and re-edits, Lost Land has been completed and mastered for screening and festival circulation.
Lost Land follows, Carter, a bewildered asylum patient in the 1930's, who seeks the source of a mysterious call from his distant, long buried past. As Carter digs deeper and deeper, however, he discovers that some memories are best left buried.
Inspired by the work of H.P. Lovecraft and Algernon Blackwood comes this tale of lost souls, eldritch powers and the madness of horrors long forgotten. 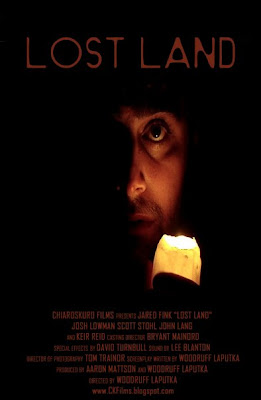 (c) 2011, Laputka films. All Rights Reserved.
(Thanks to Woodruff Laputka)
Posted by Craig Mullins at 11:36 AM No comments:

(Thanks to Emiliano Ranzani)
Posted by Craig Mullins at 6:09 PM No comments:

ANNOTATED
A rare book dealer receives a strange book with a small note that reads only, "The world must know." As he attempts to decipher the contents, he finds himself faced with deeper and darker levels of occult knowledge that chips at his sanity.
"Annotated", a short film of Lovecraftian horror adapted from an original story, is the first film by a dedicated collection of first-time film makers. Calling themselves "the TerrorScribe Mafia," the group is made up of writer/director Joe Lopez, cinematographer Keith Bates, makeup effects artist Tammy Dupal and producer Stacia Langenheder.
"Annotated" is also an official selection of the 2011 Unnameable Blood Bath Film Festival which will be held August 20th at the historic Texas Theater in Dallas, Texas.
Check out the trailer below, or watch it on Vimeo...

(Thanks to Joe Lopez)
Posted by Craig Mullins at 8:05 PM No comments:

The HPLFF returns to Portland...

Brian Callahan recently announced that the H.P. Lovecraft Film Festival is returning to Portland, Oregon for a "smaller and quieter...stripped down, back to basics affair" at the historic Hollywood Theatre, Sep 30 - Oct 1...

Check out the teaser art promo flyer below, and make sure you watch this space for more... 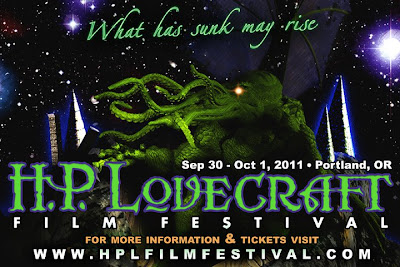 (Thanks to Brian Callahan)
Posted by Craig Mullins at 4:21 PM No comments:

Beginning with a haunting adaptation of one of M.R. James' best works, Whistle and I'll Come to You.

The Haunted Palace (1963) - directed by Roger Corman, starring Vincent Price - the first Lovecraft adaptation on the silver screen, based on "The Case of Charles Dexter Ward". Q&A with film legend Roger Corman to follow.

Concluding with a very rare DVD screening of Berkeley Square (1933), which HPL watched four times and inspired him to write one of his best stories, "The Shadow Out of Time".

Opening with the 20th anniversary of Cast a Deadly Spell, a fun original HBO movie. Taking place in neo-noir Los Angeles, everyone has access to magic spells except Harry Philip Lovecraft (Fred Ward), who is hired to investigate a missing mysterious book. Screenwriter Joseph Dougherty will be on hand for Q&A after the screening.

See the latest and greatest short subject films from independent filmmakers. The winner will be chosen by Guillermo del Toro!

La Sombra Prohibida (The Forbidden Shadow) (2010, in Spanish with English subtitles) - From MCA/Universal Pictures International (Spain), this is the second part of the "The Valdemar Legacy", directed by José Luis Alemán, this is an action piece with cameos by Lovecraft and one of his greatest creations, the Great Cthulhu!

We close the 2011 festival with a special Southern California screening of The Whisperer in Darkness, the first feature from the H.P. Lovecraft Historical Society, makers of the iconic adaptation of The Call of Cthulhu.

2011 marks the 80th anniversary of the Warner Grand Theater, as well as the 80th anniversary of the publication of "The Whisperer in Darkness" by H.P. Lovecraft in Weird Tales magazine. To celebrate, the HPLHS is planning many special promotions and events at this festival, including an exhibit of their props, miniatures, set pieces, costumes, etc., along with cast and crew Q&A. Experience the new movie based on an 80-year-old story inside an 80-year-old theater!

Lovecraft authors Cody Goodfellow, Jenna Pitman and Michael Shea and screenwriter/movie maker C. Courtney Joyner will participate in a reading and literary discussion on Saturday afternoon before the movies (other author guests TBD).

We are honored to have Oscar-nominated director Guillermo del Toro (Hellboy, Pan's Labyrinth) as our guest judge for the short film contest! Have your work screened by the legendary filmmaker! 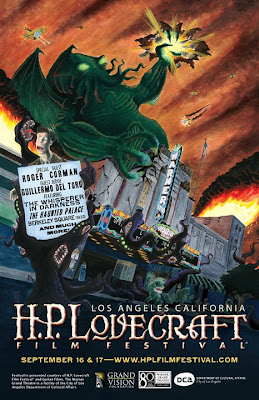 (Thanks to Aaron Vanek)
Posted by Craig Mullins at 3:55 PM 1 comment:

The Curse of Yig one-sheets, images, and reviews... 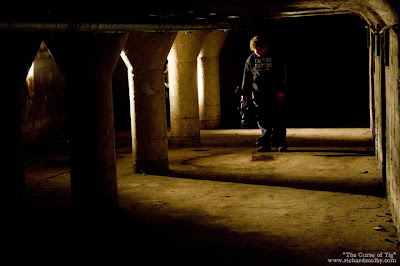 The Curse of Yig, the latest project from filmmakers Paul Von Stoetzel and Tim Uren, is finished and currently awaiting its festival run (with one screening already in the can)! Below you find several promotional posters (and images) created/taken by Richard Molby, and if you head over to She Never Slept.com and the official blog of Eldritch author W. H. Pugmire, Esq., you can read reviews of the film... 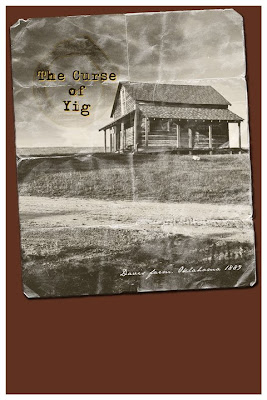 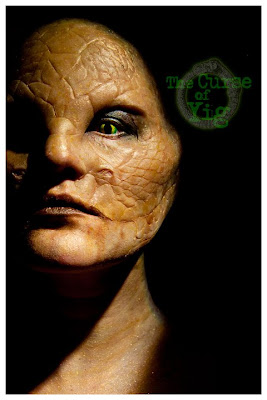 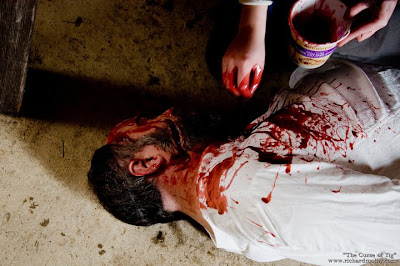 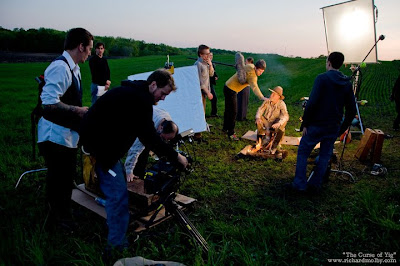 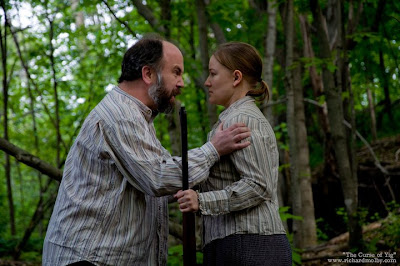 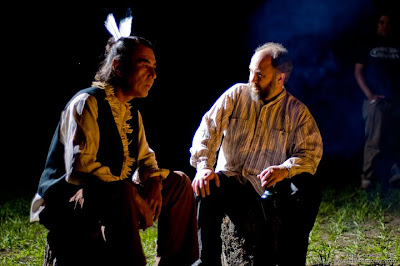 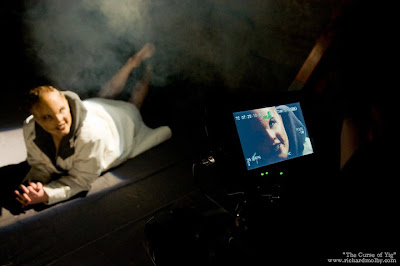 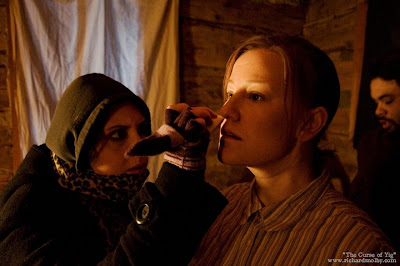 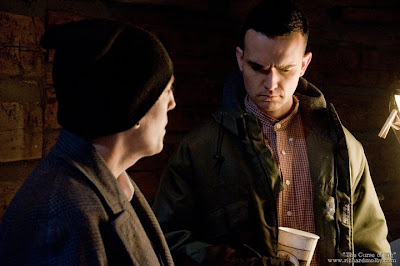