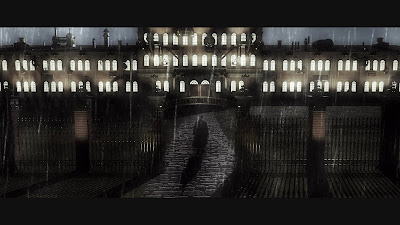 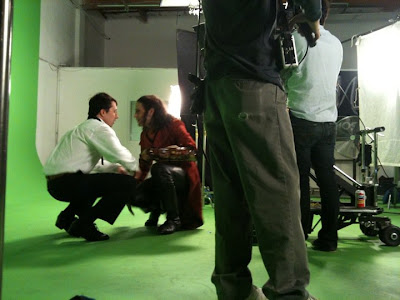 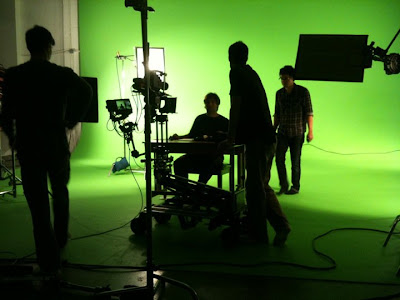 The progress is heartening, as now it looks like the film will get completed this October, rather than spring of next year!
If you'd like a more in depth look at the topics covered here and an inside insight into the process of creating the film, check out our production blog at: http://nkbproductions.blogspot.com/
Our previous film, "Frank DanCoolo" is now also available to watch in HD on vimeo!
(Thanks to Andrew W. Jones)
Posted by Craig Mullins at 3:33 PM No comments:

9 LIVES teaser rises from the depths...

The teaser clip Blue Hours Productions proposed TV series, 9 LIVES, is now online. The series is set to star Adrienne Wilkinson as Kitty Devine, a 1950's burlesque star, who moonlights as the notorious cat burglar La Chat...and who, by dint of stealing the wrong gem at the wrong time, becomes humanity's only hope of stopping the return of the intergalactic nightmare known as Cthulhu...

(Thanks to Blue Hours Productions)
Posted by Craig Mullins at 3:10 PM No comments:


Iconic actor Lance Henriksen (a personal favorite) answers a hastily thrown together question by Unfilmable.com today in an interview by Troy Foreman. We asked, "Have you ever read for, or been asked to appear in a film based on the works of author H.P. Lovecraft?"


Conversations with Lance - Special Edition from Troy Foreman on Vimeo.

(Thanks to Lance Henriksen and Troy Foreman)
Posted by Craig Mullins at 5:52 PM No comments:

At the Mountains of Madness - Animated Film

"In the wake of Guillermo del Toro's inability to produce a Hollywood version of H.P. Lovecraft's "At the Mountains of Madness," others will inevitably step forward and try. Cthulhu Films is one contender. This half hour animated adaptation of Lovecraft's infamous story mixes 3-D and 2-D effects to recall the ill fated Antarctic expedition. The dialogue is in Italian, so English listeners need to turn on the subtitles."

Labels: At the Mountains of Madness

The Earth Rejects Him...


From filmmaker Jared Skolnick, creator of The Music of Erich Zann, comes The Earth Rejects Him, a short film inspired by the works of Werner Herzog, Terrence Malick, Guillermo del Toro and H.P. Lovecraft. Described as a haunting and surreal tale about a young boy who discovers a corpse while biking in the woods, and the strange occurrence that takes place when he buries it, The Earth Rejects Him is in the final week of its funding drive via indiegogo.com...

This will be Jared's first attempt at doing a personal project (since Zann), after working with other filmmakers on their films and spending time on the festival circuit, and promises to showcase his ability to tell an unique story with high production values...

Check out the indiegogo page for more...


The Earth Rejects Him - Teaser from Jared Skolnick on Vimeo.

(Thanks to Jared Skolnick)
Posted by Craig Mullins at 1:45 PM No comments:

The Music of Erich Zann (Jared Skolnick, 2009, 38 mins), a horror film of haunting beauty and terrifying poetry, paired with:

Lovecraft: Fear of the Unknown (Frank Woodward, 2008, 90 mins), a chronicle of the life, work and mind that created the Cthulhu mythos.

AM 1200 (David Prior, 2008, 39 min.) Not a Lovecraft adaptation but very LOVECRAFTIAN in feel, AM 1200 tells the story of a man on the run, who finds himself the unwitting pawn of a possessed evangelical radio station and must ask himself whether it is better to reign in hell than serve in heaven, paired with:

Pickman's Muse (Robert Cappelletto, 2010, 77 min.) An artist, Robert Pickman, becomes obsessed by visions of unworldly horror, revealed to him through an ancient artifact discovered in an abandoned church.

Films begin promptly at 6pm on both nights at the Rochambeau Library, 708 Hope Street in Providence, RI.

Details can be found here and here... 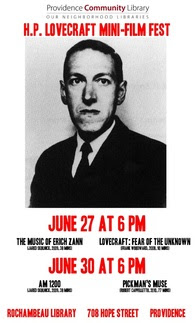 (Thanks to Robert Cappelletto)

Cthulhu Films presents: At The Mountains Of Madness...


In May, we caught up with filmmakers Michele Botticelli (A Lovecraft Dream) and Sebastián Ohaco to talk about their adaptation of At the Mountains of Madness, which has now been released, complete with subtitles! Check it out below...


(Thanks to Michele Botticelli and Sebastián Ohaco)
Posted by Craig Mullins at 9:18 PM 1 comment:

Teaser trailer for Re-Animated States of America the magazine, to be published in the winter of 2011. The magazine will feature stories written by Andrew Ozkenel and myself with artwork by Andrew. Special thanks to Mars Homeworld, of Dead House Music, for providing the outstanding music and narration for the trailer...

Check out the teaser trailer below, and watch this space for more...
(Thanks to Andrew Ozkenel and Mars Homeworld)
Posted by Craig Mullins at 4:57 PM No comments:

They don't make 'em like this anymore. Not sure if that's a good or bad thing! :D
Posted by Jeffrey B. Palmer at 5:06 PM 1 comment:

Filmmaker Joseph Nanni has given Unfilmable.com an exclusive first look at the teaser one-sheet for his forthcoming film, Black Goat! Check out the amazing Black Metal inspired promo artwork below... 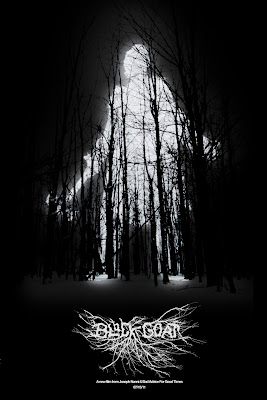 (Thanks to Joseph Nanni)
Posted by Craig Mullins at 2:31 PM 1 comment:

The 2011 H.P. Lovecraft Film Festival, to be held at the Warner Grand Theater, September 16 & 17 in San Pedro, California (Los Angeles), is fast approaching, and the event sounds like one not to be missed! Roger Corman will be attending, Guillermo del Toro will be judging the short film contest, and the H.P. Lovecraft Historical Society will be putting on a full exhibit of their props and miniatures from The Whisperer in Darkness, which is screening at the event. The HBO film Cast a Deadly Spell will also screen for its 20th Anniversary, with screenwriter Joseph Dougherty on hand for a Q&A...

Other films scheduled to screen include La Sombra Prohibida, Berkeley Square (which Lovecraft saw at least twice, and inspired him to write "The Shadow Out of Time") and Roger Corman's The Haunted Palace, starring Vincent Price. Also look for the always popular shorts block and an adaptation of an M.R. James story by the BBC...
Saturday afternoon before the festival, there will be a reading/discussion featuring authors Michael Shea, Cody Goodfellow, and Jenna Pitman...
There will also be a VIP reception (which requires a separate ticket) Friday before doors open, and a public reception Saturday night after the event closes. Both receptions will be held at an annex four doors down from the theater (where the Whisperer in Darkness exhibit will be)...
Visit:
Main website
Ticket website
Facebook group
Twitter = HPLC_Fest 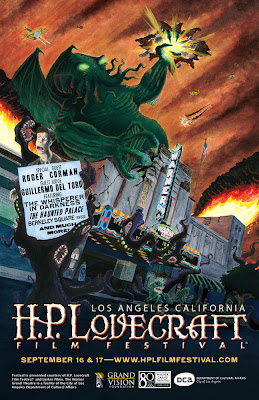 Poster art by David Milano...
(Thanks to Aaron Vanek)
Posted by Craig Mullins at 2:16 PM 3 comments:

Last night was the first time I watched „Warehouse 13“ … I heard about the series and thought I'd give it a try. And what a fun it turned out to be …

The episode „Nevermore“ deals with a student that is obsessed with Edgar Allan Poe and tries to win a fellow student's heart by means of poetry. As fate would have it, he comes across one part of a two-part „artifact“ that spreads a Poe-esque madness. This where the fun for both the Poe-fanatic and Lovecraftians starts. While the episode continues with the hunt for the second part for the „artifact“, we're in for some serious name-dropping and cross references.

While the two agents interrogate the school's dean, you can hear the following dialogue:
Dean: „He does have a reputation for scaring people.“
Pete: „Really? Does he like horror novels? Stephen King? Lovecraft? Poe?“
Dean: „You're assuming the boy reads? No, he's just a bully.“
Later, in Mr. Ives classroom, which happens to be an attic, they hear some kind of a knocking coming from behind the walls.
Claudia: „This is just the beating of my hideous ...“
Pete: „Listen. What is that?“
Claudia: „A … rat in the wall?“
Both: „A Cask of Amontillado!“
So, if you ever wanted to find out what happens when a book really „gets under your skin“ and enjoy bits of Lovecraftian references, I really recommend this episode to you.