Its Ho Ho Horror with Re-Santamator!

Kodie actor/director Abel Berry passed along a video that is sure to become a Christmas tradition here at Unfilmable.com in the form of Re-Santamator, his holiday homage to HPL's Re-Animator! Directed by Berry, and starring Justin Powers and Jennifer Stone, Re-Santamator is the first of many Lovecraft themed videos in the works over at BSEntertainment...

If you like what you see, you can check out more of their work here...
(Thanks to Abel Berry)
Posted by Craig Mullins at 2:42 PM 1 comment: 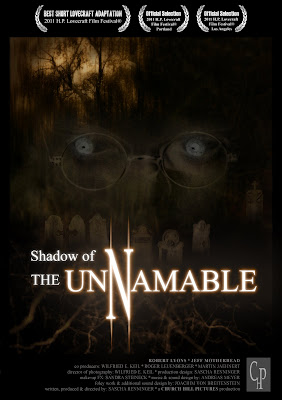 If you are a regular reader here at Unfilmable, you’ve probably seen our coverage of Shadow of the Unnamable.  A product from Germany, the filmmakers have teased us over the last year or so with slick looking production stills and an eye-catching teaser trailer.  Having premiered this past year at horror festivals worldwide, we were lucky enough to get an early peek at the project. 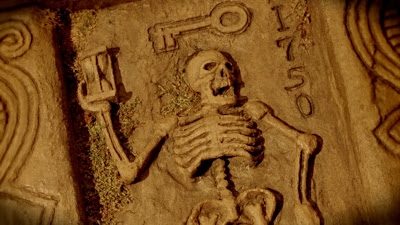 A straightforward adaptation of H.P. Lovecraft’s 1925 “The Unnamable” story, this short takes place in an atmospheric cemetery where fiction writer Randolph Carter (Robert Lyons) entertains his friend, Joel Manton (Jeff Motherhead), with stories of how he conceives his literary subjects.  “My novels don’t come without thorough investigation,” he says to his doubting friend of all things terrible that inhabit his stories.  Carter then tells the story of how the town and his ancestors battled a monster over a period of 200 years.  This unspeakable horror, Carter reveals, left a number of victims in its wake (“none of them found in one piece”).  The number of attacks dwindled over the years, but the odd author believes he has found the remains of the beast.  Where? In the creepy cottage that lays just a few yards behind Manton, of course. 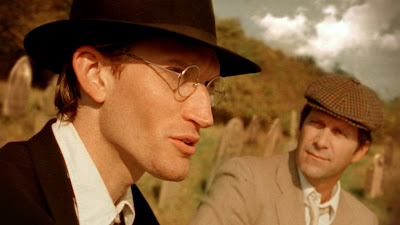 Originally published in an issue of Weird Tales, Lovecraft’s “The Unnamable” is a solid short story with one of horror literature’s great “it is right behind you” stings.  The story previously provided the source for Jean-Paul Ouellette’s The Unnamable films and, while the first film does feature the characters and scenario from the short story, little is similar after that.  Director-producer-writer Sascha Renninger gives the story its first proper adaptation as he brings the scenario to perfectly realized life nearly word by word.  Renninger has taken great pains to give us a pure Lovecraft adaptation and his work is befitting the classic short story.  Opening with an impressive animation unfolding over a lush score by Andreas Meyer, the 16-minute short is incredibly well made. All of the technical elements are top notch with superb cinematography by Wilfried Keil (the opening steadicam shot is killer) and some really clever editing by Renninger and Florian Eisner.  Honestly, the production values are better than half the stuff littering the horror market right now.  Like its literary inspiration, the film keeps the monster hidden in shadows and brief glances with the beast being created via CGI (there is a great scene of the monster gutting a victim with only shadows on the wall giving the audience a glimpse of the action). 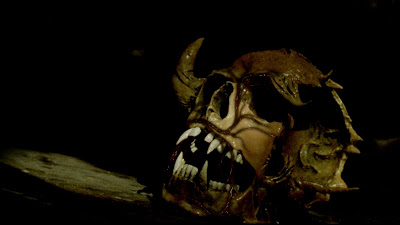 Helping further back up the superior technical aspects is an astounding attention to period detail.  Like the fine filmmakers at the H.P. Lovecraft Historical Society, Renninger and his crew are able to amazingly recreate 1920s New England on a budget that I’m sure wouldn’t get James Cameron to roll out of bed in the morning.  Particularly impressive is the film’s coda which features vintage cars and dozens of extras in period costuming wandering around a vividly created Arkham Asylum.  The acting is also very solid for an independent feature.  Naturally, the film rests on the shoulders of its storyteller and Robert Lyons (not to be confused with veteran American character actor Robert F. Lyons) is quite good as the Lovecraft surrogate Randolph Carter.  He definitely gives his performance the necessary creepy edge and he even bears a slight resemblance to the celebrated author. 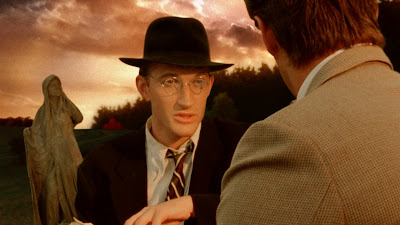 This brings me to my lone complaint about the film.  I was upset that this was only a short as such a handsomely mounted production is completely worthy of a feature length film.  Alas, Renninger set about to just give the world a faithful adaptation of Lovecraft’s short story and he succeeded marvelously with Shadow of the Unnamable.  With a perfect combination of behind-the-camera professionalism and reverence for the source material, it is no wonder this short recently won Best Short Lovecraft Adaptation at the 2011 H.P. Lovecraft Film Festival.

Shadow of the Unnamable teaser:

Writer/director Gary Lobstein, who previously worked on the Lovecraft inspired films Roe and The Picture in the House, has released his latest, a comedy/horror short titled A Lot of Evil! Written by Julie Lobstein and starring Jeff Gruhala, the film revolves around a H.P. Lovecraft fanboy who buys a book online that he thinks will help him summon a real Cthulhu monster...

Gary plans to submit the film to next years HPLFF, where both of his previous adaptations screened. Check out A Lot of Evil below...
(Thanks to Gary Lobstein)
Posted by Craig Mullins at 3:51 PM No comments:

Inspired by the works of H.P. Lovecraft, The Rats in the Walls is a multimedia project and thesis work from Petr Augustin, an artist from the Czech Republic. When finished, the project will consist of 15 hand drawn videos, with a new chapter released every week...

You can check out the first video below, and can catch later chapters here...
(Thanks to Petr Augustin)
Posted by Craig Mullins at 3:20 PM 1 comment:

The Whisperer in Darkness DVD is now available...

Sean Branney announced today, via facebook, that the H.P. Lovecraft Historical Society is taking orders for the Whisperer in Darkness on DVD! Based on HPL's 1931 tale, and brought to life using their patented Mythoscope™ process (a mix of vintage and modern techniques), The Whisperer in Darkness tells of Albert Wilmarth, a folklore professor at Miskatonic University, who investigates legends of strange creatures rumored to dwell in the most remote mountains of Vermont. Wilmarth's investigation leads him to a discovery of horrors quite beyond anything he ever imagined, and ends in a desperate attempt to escape the remote New England hills with his life and sanity intact...

The highly anticipated follow-up to their now classic The Call of Cthulhu stars Matt Foyer and Barry Lynch, and was shot on location in New England and in Hollywood...
The deluxe 2-disc DVD features:
- The Whisperer in Darkness (103 minutes, black and white) with 5.1 surround sound
- a commentary track with the film's producers
- subtitles in twenty three languages
- a replica prop newspaper clipping about the Vermont flooding
Disc two features:
- a delightful and revealing 47 minute Behind the Scenes documentary
- seven documentary featurettes showcasing special effects and filmmaking techniques
- numerous deleted and/or extended scenes
- strange bonus features we cannot even describe
all Whisperer in Darkness trailers
Retail is $24.50...
Click here for more... 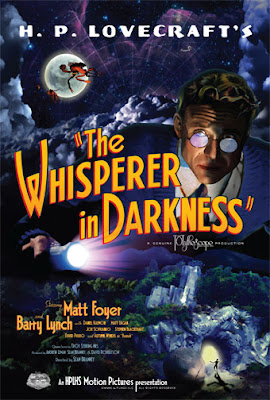 (Thanks to Sean Branney)
Posted by Craig Mullins at 2:52 PM No comments:

Hell on Earth is coming to DVD...


Hell on Earth is a film that I covered awhile back, based on an official site that described it as "Lovecraftian", and now according to Dread Central, it is finally coming to DVD courtesy of Elite Entertainment. From the producer of the cult classic The Deadly Spawn, Hell on Earth tells the story of seventeen year old Bobby, who plays with "imaginary friends" provided by the mysterious and ancient "Apocryphal Book of Tarkuhm" given to him by his eccentric and somewhat crazy Aunt Sadie. Little does he know that the monsters and demons are only biding their time until the planets are aligned and they can get him to read the passage freeing their master from the "Hell" of another universe...

The DVD features a director's commentary, still gallery and audition/casting footage, and will be released January 24th... 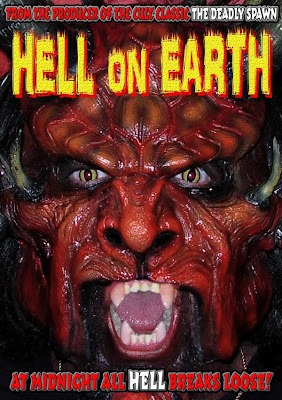 (Thanks to Dread Central)
Posted by Craig Mullins at 2:31 PM No comments: