PORTLAND HEARS THE CALL OF CTHULHU!

Just in via Gwen Callahan:
Portland, OR - February 22, 2013—
The H. P. Lovecraft Film Festival® & CthulhuCon returns to the Hollywood Theatre May 3-5th to celebrate 18 years of Cosmic Horror with new gaming events, a local filmmaker competition, and Guest of Honor Sandy Petersen, the creator of the Call of Cthulhu® role playing game.
To raise funds for key upfront expenses, the festival is offering the community an interactive role in the event through a new Kickstarter campaign which runs until March 13th at http://bit.ly/kickhplffpdx
Highlights of the festival's Kickstarter campaign, include a role in a live radio play staged by the H. P. Lovecraft Historical Society, a chance to judge the Best Short Film, participation in a Call of Cthulhu® scenario run by Sandy Petersen, a new woodblock print created by local Portland artist Liv Rainey-Smith, whose work has appeared on the IFC show “Portlandia,” VIP and deluxe 3-day festival packages, and an executive producer role which puts your name in lights on the marquee!
The H. P. Lovecraft Film Festival® & CthulhuCon will also host the “Lovecraft Under The Gun” 72-hour film competition to increase awareness of Portland-area independent film. Local filmmakers race to complete a short film, from scripting through post-production, in only three days. The festival audience will choose the winning film after a special screening on the main stage. Open to all local filmmakers, teams can pre-register at hplfilmfestival.com/lutg.
Since 1996, the H. P. Lovecraft Film Festival® has been a Portland institution, celebrating film, literature, and art influenced by the master of Cosmic Horror, H. P. Lovecraft. The festival has grown to three nights and two days of Horror, Fantasy, and Science Fiction showcasing independent short and feature films, author readings, panel discussions, and live events on all three screens of the historic Hollywood Theatre.
The Festival opens at 6 pm on Friday, May 3rd with an evening program, and continues through the weekend with afternoon and evening shows on Saturday and Sunday. Tickets are currently available through the Kickstarter campaign at http://bit.ly/kickhplffpdx and will go on sale in early March through the Hollywood Theatre website and box office. Advance weekend passes are $55. Advance single night passes for Friday are $15, Saturday $25, Sunday $25. Prices will be higher at the door.
For more information, please visit www.hplfilmfestival.com
www.facebook.com/hplfilmfestival
twitter: @HPLFF_PDX

“Shadow of the Unnamable” in Berlin! 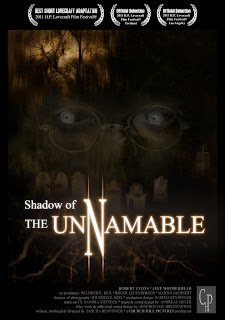 “Shadow of the Unnamable” in Berlin! “Shadow of the Unnamable” will be shown on Saturday, February 16th in the movie theatre "Babylon" in Berlin - as part of the Berlin Independent Film Festival 2013.
This will, according to Sascha Renninger, probably be the last chance for german Lovecraftians to see the (multiple) award-winning movie on the Big Screen. The filmmakers will be at the screening as well, so here's your chance to meet them in person!
Berlin Independent Film Festival: www.berlinfest.com http://www.berlinfest.com/?page_id=1295
Berlin, Germany February 16th, 2013
Posted by Lady Lovecraft at 3:54 PM 1 comment:

A Trip to Innsmouth (Lovecraftian Lego)

Found via Mike Davis from the Lovecraft eZine:
"Based on a setting created by H P Lovecraft in his story 'The Shadow over Innsmouth'
This is the first time I've tried voice acting in a video, so I'd like some feedback.
I've always liked the Shadow over Innsmouth, and thought it was time to have a go at animating a little scenario from that town. This was also inspired by the film 'Dagon' by Stuart Gordon, which I recommend to any Lovecraft fan. Sometime in the future I would like to do a full adaptation of the story, when I have time.
Making LEGO fishpeople is so much fun!"
Here is the YouTube page for Lovecraftian Lego
Posted by Lady Lovecraft at 3:42 PM No comments: