The Call of Tutu, a short film all Lovecraft fans should see.
Posted by MorganScorpion at 4:56 PM No comments:

The well-informed people over at the Lovecraft eZine (a must for fans), recently put out a link to a short film called Blight, which was promoted as "a terrifying short horror film inspired by the H P Lovecraft story A Colour out of Space". Of course I had to watch it. But then I thought I'd check out the channel. There are only two films on this channel, and the other one is called Fools Errand. Of course I had to watch that one too.

One gets so used to these films being promoted as terrifying that one never believes it. Almost always they turn out to be very pedestrian efforts, badly-made, derivative and about as scary as Scooby Doo. In this case, they were telling the truth. Blight gave me a few nasty scares, and one jump scare. The production values are professional, the plot brief but full of import, and the monster genuinely scary. And repulsive, very repulsive. Amazingly this movie is dependant upon CGI, but the CGI actually works! The story is indeed inspired by A Colour Out of Space, but don't expect it to be faithful. There is indeed a blight, and a decaying farmhouse, and a family tragedy; but I won't spoil you as to the rest.

The second film, Fool's Errand, has a much more tenuous Lovecraft connection, set in an Egyptian tomb. However, Lovecraft did write Imprisoned With the Pharaohs, and Nyarlathotep, who in antique and shadowy Khem.... The plot is very predictable, and nothing special at all. But the way it is done! Again there's some CGI, and again it is done extremely well. There are some extremely gruesome effects in this short.

The man behind both films is called Goodman Walshe, and there is nothing on his channel about him, though I'm pretty sure that we will learn more of him in the future.

You can watch both these films in thirteen minutes, so no excuses for missing them!


Posted by MorganScorpion at 12:29 PM No comments:

Have you heard of Creepypasta?
I'm sure that many of you have, mainly in connection with Slenderman. I have a great love of listening to Creepypastas on YouTube. They vary in quality, from bad to excellent.

This one is excellent. Read by the wonderful Dr Creepen, with the vocal assistance of Black-eyed Blonde and Southern Cannibal, it was written by Ryan Brennerman and is called "No Such Thing as Ghosts".

No Such Thing as Ghosts.
Is it Lovecraft? I am sure that once you have finished the story you will answer "Yes" through trembling lips.
Posted by MorganScorpion at 1:41 PM No comments: 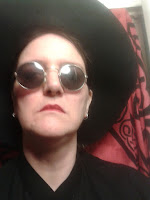 I have a huge apology to make to readers of this blog. Craig Mullins entrusted it to me when the encroachment of other things made it unfeasible for him to continue it. For some reason, (menopause, madness, incipient senility?) I forgot all about it, only discovering it when I went to start my new horror blog, Morbid and Unhealthy.
So, now I intend to try and revive this blog, as soon as I can get my rusty old brain to produce some content. But I do have Quatermass 2 lined up to watch on DVD, which is Lovecraft as fuck.
This is a film blog, though I may make occasional mention to books and to other media, but I do want to keep it Lovecraft.
Briefly however, I want to define "Lovecraftian" here.


Posted by MorganScorpion at 10:42 AM No comments: