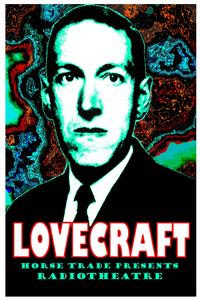 Over at More Intelligent Life, writer Jason Zinoman is considering why H.P. Lovecraft adaptations might be more suitable to theatre than cinema.

He begins with a recount of Guillermo Del Toro's recent false starts, touches on why Lovecraft is important to horror writers, and quotes Lovecraft's thoughts on movies. But perhaps HPL's works are in fact right for theatrical performance...

Films may be unable to truly capture a sense of what Lovecraft called “cosmic awe”. But another form not generally associated with horror has recently proved to be a more natural home: the theatre. To appreciate why Lovecraft is a perfect writer for the stage, it’s necessary to understand his worldview—what you might call his philosophy of fear.

Zinoman goes on to review a review of the six-story adaptation now playing in New York's East Village.

But it’s doubtful any show could capture his spooky enigmatic quality better than Radiotheater, which mounts six Lovecraft stories (along with “The Dunwich Horror” and “Pickman’s Model”) performed by four actors speaking into microphones in solitary spotlights. Creepy music, a few light cues and a burst of smoke are the only design. This chilling production concentrates attention on the voice, the words and, most importantly, the darkness... The minimalism of this production is not merely style. It faithfully supports Lovecraft’s philosophy. If the strongest fear is of the unknown, then the monster itself is less terrifying once it is revealed.

It's an interesting angle for a theatre review. I actually just came from seeing a play this afternoon -- and it always strikes me how vastly different writing, acting, and presentation styles are when you contrast theatre to cinema.

Theatre is about words, and Lovecraft loved the use of prose. Cinema is about emotion, imagery, and interpretation of the ideas contained in prose.

I would argue that the sense of "cosmic awe" that Lovecraft didn't see in film versions of Dracula and Frankenstein was a problem of its time. In the decades since, we have seen cinematic artists push the form into areas that audiences of the 1930s never would have predicted. Is it the SAME as reading fiction? Do all stories benefit from a literal plot adaptation? No, but I imagine Lovecraft would have some appreciation for films like 2001, Alien, Uzumaki, and Pi.

Read "Stories of Darkness" at moreintelligentlife.com

Find out more about Radiotheatre's Lovecraft Festival at radiotheatrenyc.com
Posted by Mike Boas at 5:28 PM