SKF's Lovecraft Spoof to Kick-Off Motor City Nightmares Weekend of Horrors Film Festival
Stunt Kitty Films (SKF) is pleased to announce their latest short film, "A Fish Called Martha or: Who's Really Afraid of H.P. Lovecraft Anyway?" will have it's world premiere at the Motor City Nightmares Weekend of Horrors Film Festival (MCNFF) in Novi, Michigan.
Rob Robinson (writer/producer), having grown up in nearby Plymouth, could not think of a better event to premiere SKF's latest effort while helping to show support for the fledgling Michigan film industry. "If Michigan had the film industry 25 years ago that it has now; I might not have ever felt the need to relocate to California after graduation. But then of course I wouldn't have met my collaborative partner, actress and director Debora Roventini."
It's out of the frying pan and into George and Martha's rumpus room for a night of supernatural mambo jumbo when young H.P. and his slim-hipped wife, fleeing a monster of comic proportions, seek refuge on the campus of the infamous Miskatonic University in the outrageous supernatural spoof starring Ken MacFarlane (Caesar and Otto's Summer Camp Massacre and SKF's The Golem), William Bertrand (SKF's Attack of the Baby Doll), Lyle Palaski and Debora Roventini who also directs.
You can view the trailer at stuntkittyfilms.com/fish/trailer
"A Fish Called Martha..." is part of SKF's Hollyweird Collection of short films which also includes "Whatever Happened to Debora Roventini?" and "Blob on a Hot Tin Roof".
The filmmakers, who will be in attendance, encourage everyone in the Metro Detroit area who love their horror on the silly side to come out and see the show and say hello.
Stunt Kitty Films is a micro-budget film studio based in North Hollywood, California.
http://www.stuntkittyfilms.com/
The Motor City Nightmares Weekend of Horrors - Horror, Sci Fi and Comics Convention and Film Festival runs April 15th-17th at the Sheraton Detroit Novi, 21111 Haggerty Road, Novi, Michigan
http://www.motorcitynightmares.com/
Screening time for SKF's "A Fish Called Martha or: Who's Really Afraid of H.P. Lovecraft Anyway?" is 5pm, Friday April 15th, 2011. 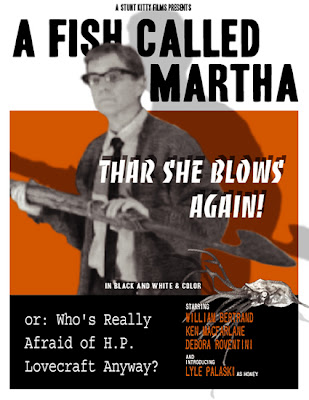 (Thanks to Rob and Deb)
Posted by Craig Mullins at 9:13 AM