The Music of H.P. Lovecraft... 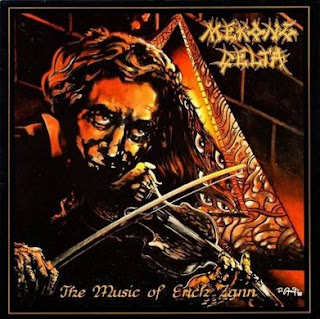 A quick look at the Encyclopaedia Metallum reveals that 170 bands list H.P. Lovecraft as a source of inspiration for their lyrical themes. While that count isn't as lofty as the number of writers and filmmakers who have used HPL as a springboard, it does go to show how widespread his popularity has grown globally. Bands like Chaotic Aeon (China), Mekong Delta (Germany), Deathspawn Voidbringer (Sweden), and Black Temple Below (Italy) all list Lovecraft as an influence. A book, "The Strange Sound of Cthulhu: Music Inspired by the Writings of Lovecraft" by Gary Hill, has even been written on the subject...

Every few days, I'm going to post a song/video (with lyrics if possible) to show just what HPL's eldritch influence has wrought...

My first selection is De Vermis Mysteriis by High on Fire (w/ lyrics)...

Wizards, Hypoborea, craft of Khem, torn of the acriment write of their place
Winds of Zaar, origin traced, blue of skin, nuclear phase takes a race lost in time

Lance of kings, string of hate, obsessed upon morals and taint that obeys winds and kinds
Perpetrate, land affixed, Acheron escaping the scrolls and a fate of their shrine